‘Thambi’, the statue of a brown knight wearing a white shirt and a veshti, the mascot of the 44th International Chess Olympiad, has grabbed the attention of everyone, including the players from abroad who arrived in Chennai to participate in the marquee event.

Gigantic statues of Thambi were placed at important locations across the city and to know the story behind them, The Indian Express spoke to the team involved in creating the structures.

Aadland Thiagarajan, a sculptor and an art director, alongside his son and architect Tinu Balaji, have given life to these pieces through their company ‘Sirpam’. Thiagarajan said he has undertaken several state government works and has received several accolades for them and now he is more than happy to be a part of the global chess event.

Thiagarajan said, “We were provided 15 days to create the structures. It is a very short period but we took it up as a challenge. Close to 60 artists worked day and night to complete the work. If you look at the Thambi statues, we have created three types of them. Some of the Thambi statues stand with folded hands, while the others are seen tying a veshti. The third type is the Sathuranga Thambi Kudumbam, (Thambi’s chess family). Apart from these, we also created chess coins like Kings, Queens and a Bishop,” he said. 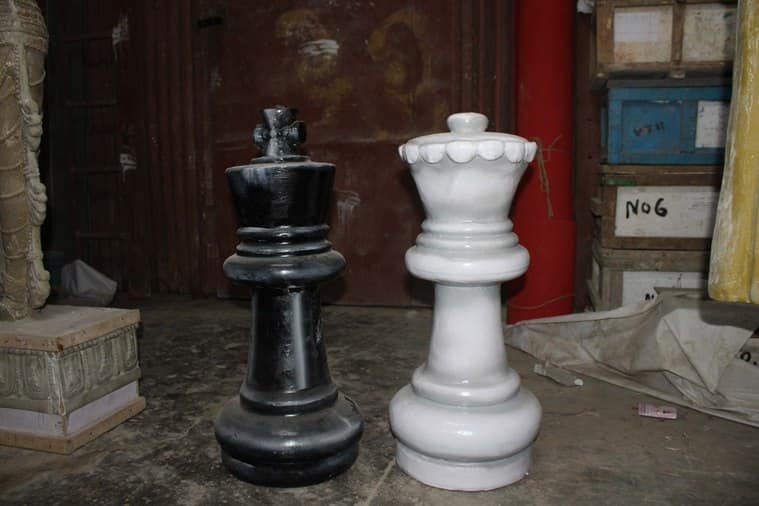 chess coins put up in Chennai are about 15 feet in height.(Express Photo)

Thiagarajan added, “We made around 28 statues of Thambi and based on the directions of the government, they were placed at all important areas in Chennai like Marina beach, Rippon Building, etc. People are admiring these statues, especially kids are so happy to see Thambi. People are clicking selfies with them. When we see the happiness on their face, we get a sense of satisfaction and all the pain we endured while making these statues go away. From the Chief Minister to every official in the government congratulated us for the work.” 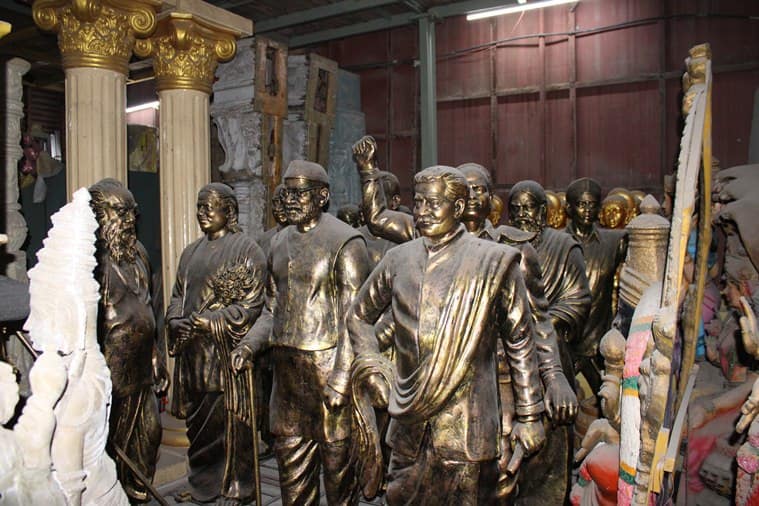 How were the Thambi statues made

Thiagarajan shared that they first made a skeleton of the structure by welding several pieces of iron. Hard pipe materials, fibre dye, coconut fibre, jute ropes and several other materials were used to make the structure.

“At a time, close to seven sculptors worked on the features of the statues such as the eyes, nose, ears, hands, legs etc in order to complete the work on time,” he added.

Tinu Balaji further explained the process behind the making of the mascot.

“Before making the structure, we did a scale drawing. After that, it was sent to the moulding team who set the frame as per the scale drawing and later, we worked on the clay. After that, we carried out the fibre work. After the completion of the required works, which includes setting up the base, the structures were sent to the artists who completed the painting work,” he said.

Thiagarajan added that all the techniques that he had used were learnt from his father K G Velusamy, a veteran in the field of art direction. “I have been doing the business for over 25 years. My father has done art direction for several hundred films in Tamil, Kannada and Malayalam, including some epics like Kuravanji, Karnan, Pathala Pairavi, Thangapadhumai and others,” Thiagrajan said.

He added, “I have worked closely with my father. In Ulagam Sutrum Valiban, there is one scene involving MGR (MG Ramachandran) and (MN) Nambiar at a Buddha temple. The set was erected completely under my supervision and people during those times never believed it was a set. Temple architecture has been our family business. I learnt all the techniques from my father. The methods that are used nowadays like masking were attempted by us several years ago. My brother is an art director too and has worked in over 300 films. I learnt painting from him. So, my father and brother have been my gurus.”

Thiagarajan’s team was also involved in creating the widely-appreciated Tamil Nadu republic day tableau this year. A controversy erupted after the Tamil Nadu government’s tableau featured contributions of freedom fighters from the state in the Indian Independence movement and was rejected by the Centre from taking part in the Republic Day parade in New Delhi.

Later, based on the directions of Chief Minister M K Stalin, the tableau was showcased at important cities of Tamil Nadu and was also a part of the state-level celebrations in Chennai on January 26.

Thiagarajan added that all the techniques that he had used were learnt from his father K G Velusamy, a veteran in the field of art direction. (Express)

Thiagarajan said his team had created 16 statues of Tamil leaders, including Muthuramalinga Thevar, EVR Periyar and K Kamaraj in a span of four days. “Close to 50 of our employees were engaged in completing the work. These are portrait works that are difficult to make as we need to get everything in the right size and proportion. The showcase of tableaus across the cities elated the public. It was celebrated across Tamil Nadu. I believe that was my best work. The Chief Minister particularly liked the Periyar statue,” Thiagrajan said.

He added that they have made close to 25 bronze statues in Andhra Pradesh, including the ones of former Chief Minister N T Rama Rao.

“I had set up the Tamil Nadu Arangam, Andhra Pradesh Arangam and the Puducherry Arangam at the India International Trade Fair in New Delhi. All my works were appreciated widely. Close to 150 of our members used to go to Delhi during that time to complete the works. I have done replicas of Valluvar Kottam, Poompuhar (ancient port city), Charminar and Warangal. Even today, when I think about it, I wonder how I managed to do those works,” Thiagrajan said.

The Chess Olympiad, which began with a grand opening ceremony on July 28 at the Nehru Indoor Stadium in Chennai, is set to go on till August 10 at Mahabalipuram.