THE UNITED Kingdom is bathed in sweat and chaos. Of a departing prime minister, of an unprecedented heat wave, of a pandemic that refuses to fade away. Into this flux, on Thursday, comes the Commonwealth Games, with its promise of a welcome distraction but carrying shadows of its awkward history and an existential crisis.

Still, sport has a way of enabling short-term positive amnesia, a state accentuated with the collective pride of being a host country. So as Birmingham gamely plods along with its pre-committed hosting duties, the next two weeks will throw up their fair share of “aww” moments, lending themselves to wholesome GIFs and fluttering pink emoji hearts on digital screens.

Straddling the two distinct realities in the same universe will be the economic meltdown-impacted Sri Lankan contingent that congregated around the baggage carousel at the airport. They were waiting to be transported to their accommodation for the next fortnight, a mindspace away from the fuel and food crisis back home.

“It’s been difficult to concentrate on training though we have got all the help from Sri Lankan sports supporters to come here. But it’s a constant thought that our families back home can run out of food and petrol any day,” says 109-kg weightlifter Ushan Charuka, undeterred by his zombie-like Colombo-Dubai-Birmingham itinerary.

“Winning medals is tough, but surviving is tougher,” says the big man from Matara who also competed at the previous edition in Australia’s Gold Coast in happier times. The Lankans are wearing a traditional motif — and love for country — on their sleeve on this strange tour that signifies beauty amidst resilience.

But then, history shows that Birmingham doesn’t even need to be window-dressed to be inspirational. 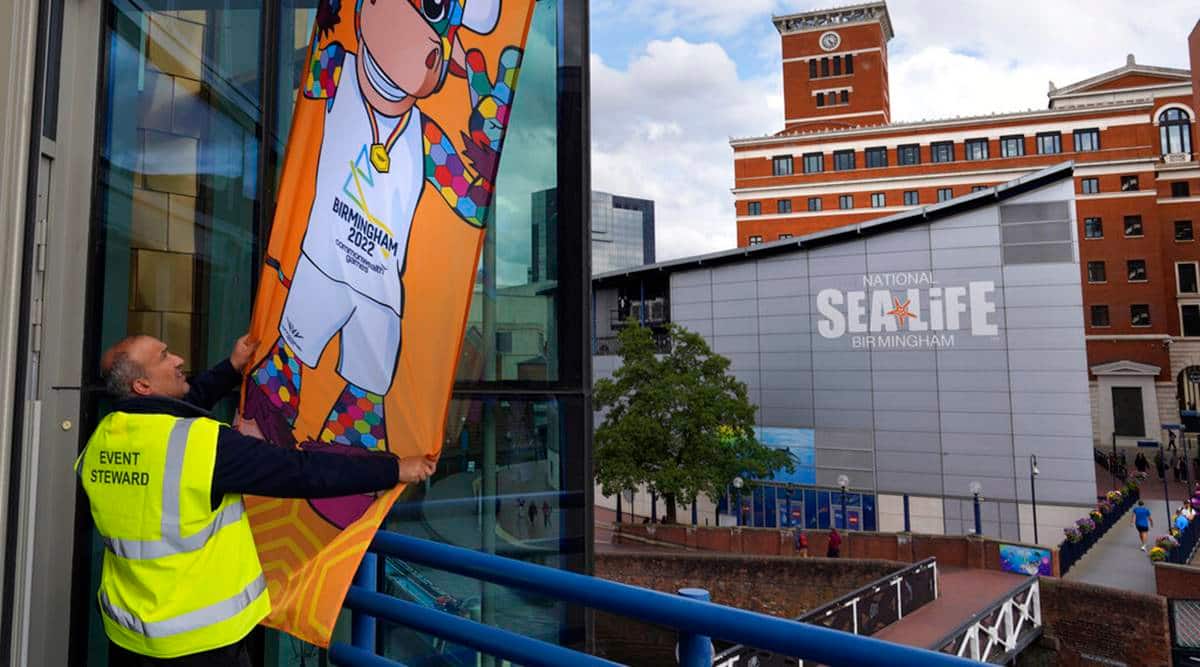 A security guard adjusts the flag of the Commonwealth Games mascot, Perry the Bull, in Birmingham, England. (AP Photo)

The industrial factory town that was in an eternal state of smoggy grime through the 60s, 70s and 80s was the same that a century ago gave the world steam engines. The genius that was J R R Tolkein thought up both the merry Shire and Sauron’s Eye, of “The Lords of the Rings”, sitting right there in Brummie-land, finding inspiration for debasement and glory in the sights around him. English reggae and pop band UB40’s “I can’t help falling in love with you” foresaw both the surveillance omniscience and hopelessly naive love in the same spooky pixelated music video of this city.

“Peaky Blinders”, the OTT phenom about gang families of Birmingham, straddles both loyalty and betrayal, and philosophical, sullen truths on life and death, as well as Tommy Shelby’s invective-fuelled menace. Around the city, there are “Peaky Blinders” montages that one can glean on the way to catch up on sports. Celebrating the noir alongside the noble is Birmingham.

The organisers haven’t missed any trick. They have roped in the greatest fretting fingers, Black Sabbath guitarist Tony Iommi, to kickstart the show. For the first-ever Games where the para-sport programme — powerlifting, wheelchair TT and basketball notably — will run integrated alongside the able-bodied one, there is no bigger deity to disabled greatness to underline the mainstreaming of para-sport. 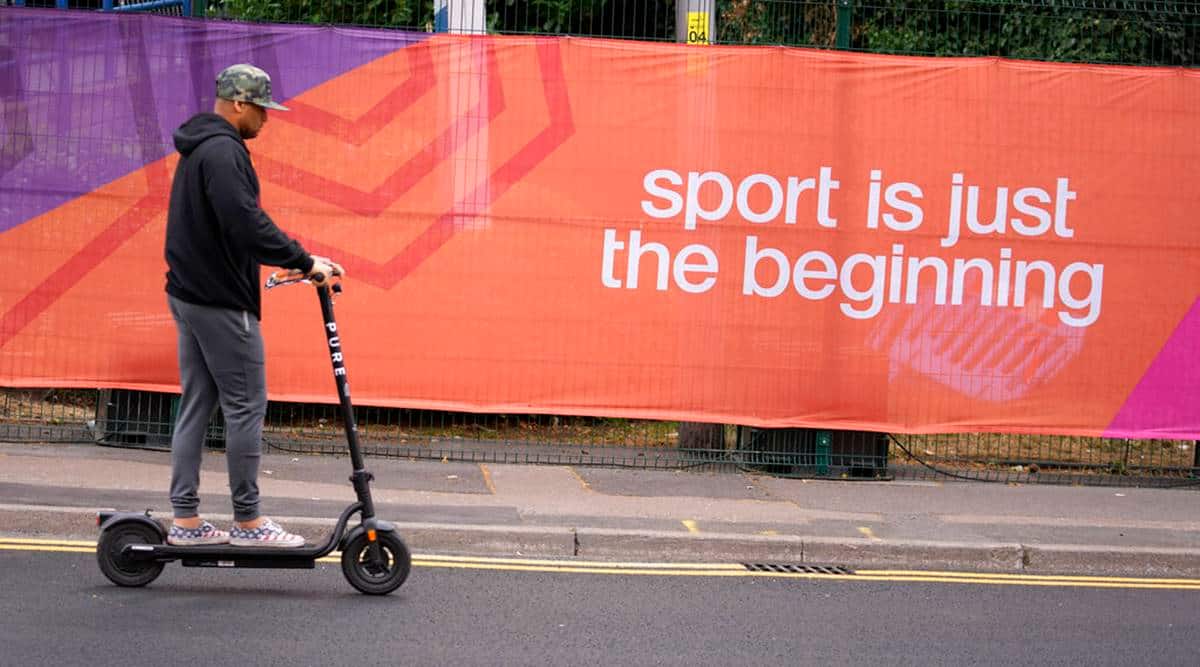 A man rides past the Commonwealth Games arena in Birmingham, England. (AP Photo)

A teenaged Iommi, a natural southpaw, lost two fingertips to a workshop accident and then fashioned an extension out of a plastic cap, going on to compose some of rock’s greatest riffs ever heard.

In Birmingham on Games eve, and not too far from where Team England have been housed in a city-centre hotel, breaking the “one big happy Games Village” tradition, lies the Black Sabbath Bridge, newly christened from Broad Street Bridge. It’s a canal waterfront with tony eateries and a distinct Venice gondola vibe, where ducks and seagulls preen for photographs of Games visitors trooping in. Sport at the Games here will be lathered in culture — music, theatre, art exhibitions, street plays and a bohemian gallivant even for the athletes, not strictly cocooned inside stern high-performance prisons. 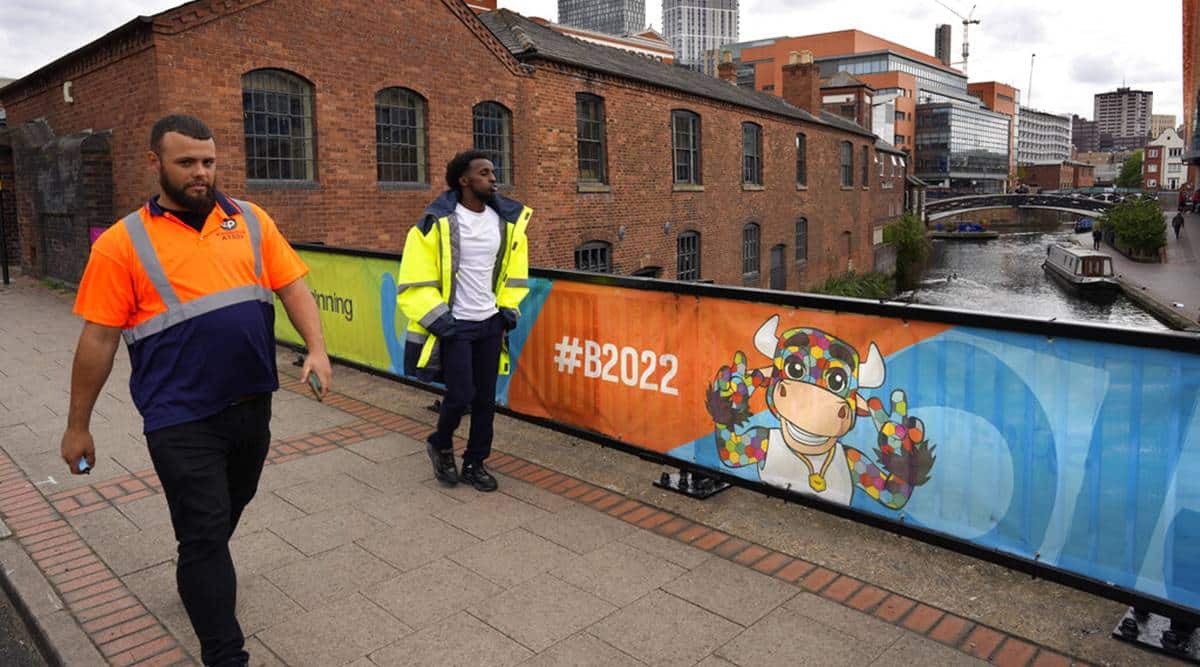 The medals at this Games aren’t a straight round nuggetty block of metal either, but bordered by a wreath-like mesh design representing the canals of the city and its history of cast metal workshops and jewellery quarters that pioneered belt buckles, snuff boxes and jewel designs during the Industrial Revolution.

India will lament the gold glut of the missing shooting discipline and the last-minute pullout of their designated flag-bearer Neeraj Chopra within days of his javelin silver at the World Athletics Championship. They will expect to pump their fists whenever P V Sindhu smashes the shuttle like a bullet through the fastest at the NEC venue, as she chases a personal milestone. The world championship winner and Olympic silver medallist hasn’t been on the top of the podium at the Commonwealth Games. As players deal with opponents, the sport too has to fight its own battles. 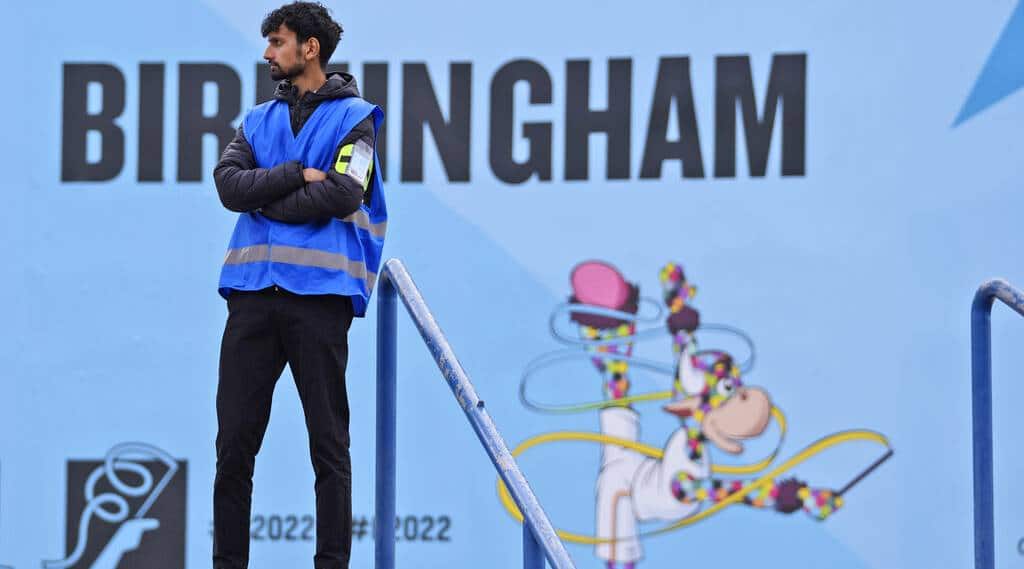 A security guard stands outside the Commonwealth Games arena in Birmingham. (AP Photo)

The wrangle for eyeballs of attention-deficit youth drifting towards other entertainment has forced even the Olympic movement to rejig its formats to remain relevant. Into this mix, comes the charming, yet much-cussed-at, Commonwealth Games with its colonial history and confounding politics.

But Birmingham is ready to take on the challenge. There might not be a better city in the UK to allay some of that anger — with its multi-cultural population, drawn from South Asian and Caribbean heritage.

The Games anthem is also a suitably upbeat reggae whistle “Champion” by UB40, Birmingham’s other socially-tuned-in group. That, too, is an apt choice. From getting its name from the card for unemployment benefits in the late 70s to the virus surge and the recent “cost of living” crisis that has brought down a prime minister, the West Midlands’ crooners seem to have spanned UK’s time travails — quite like the Commonwealth Games.