Perched on a fiery horse with a calm and collected expression — this image of Napoleon is embedded in every person’s mind. Considered a popular image of the French military leader since 1801, five exact versions of this painting were made by his loyal servant Jacques-Louis David till 1805. The first version of the painting hangs in Château de Malmaison, France. While some claim this was the perfect propaganda tool used by Napoleon, others praise David’s ability to capture movement on canvas. But what is it about this piece of art that skillfully glorifies the image of the French leader?

Why was the painting made?

France was emerging as a great power after a decade of uncertainty following the Revolution. Napoleon played a huge role in the fight against the revolutionary government. He effectively became the most powerful man in the country and even declared himself emperor at one point. In 1800, he led his troops across the Alps in a campaign against Austrians, which ended in their defeat at the Battle of Marengo. People often ignore the known fact that Napoleon did not actually lead his troops but merely followed a couple of days later. In reality, he travelled through a narrow path on the back of a mule and did not face any difficulties unlike his troops. But clearly, at that point, no one cared about that fact or did not know about it. The King of Spain commissioned the portrait of Napoleon and wanted it to be hung in a gallery with other portraits of military leaders in order to praise his attempts in the war. 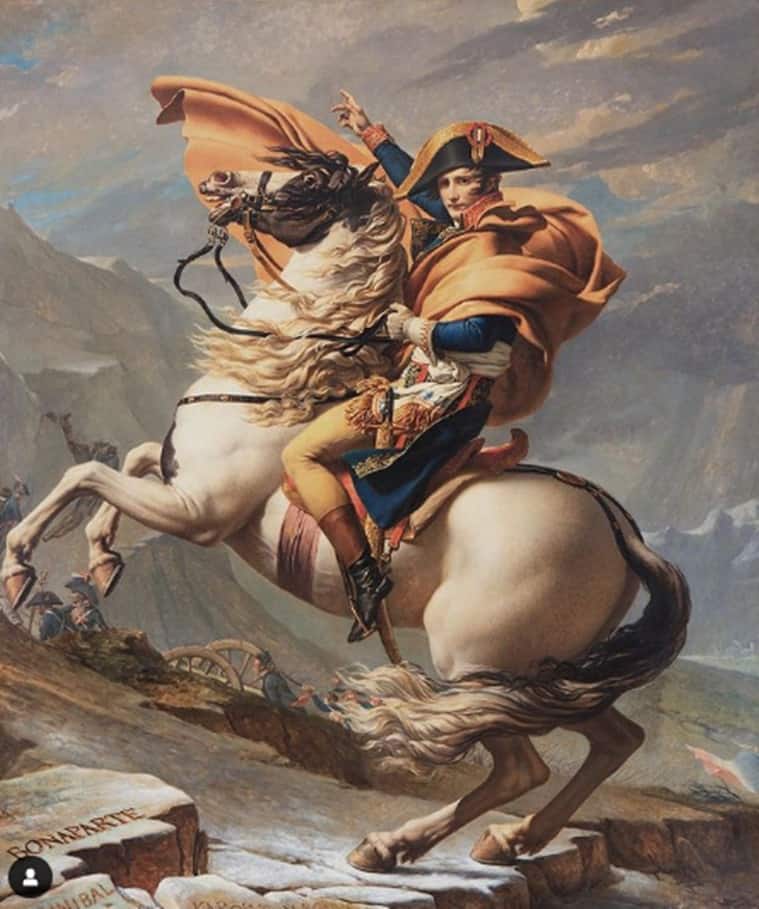 The King of Spain commissioned the portrait of Napoleon and wanted it to be hung in a gallery with other portraits of military leaders. (Photo: Instagram/@arthistory_curated)

The making of the painting

The first version of the painting was completed in four months in 1801, but Napoleon simply refused to support David in painting the portrait. He did not want to sit for it saying, “Nobody knows if the portraits of the great men resemble them, it is enough that their genius lives there”. Napoleon, however, did tell David to paint a portrait with a fiery horse in it. The painter had to use earlier portraits as examples and used the uniform Napoleon wore for the Battle of Marengo as a reference point. But that alone is not enough for any artist to work with. David had to eventually ask his own son to stand on a ladder and pose wearing Napoleon’s uniform. This explains the youthful physique of the figure in the painting. David used a different style of painting compared to his predecessors François Boucher and Jean-Honoré Fragonard. The painters used to employ a red or grey undercoat as a base colour on which to build up the painting. In this painting, David has instead used the white background of the canvas directly underneath his colour. He used two or three layers to paint this masterpiece. He would use a brush with little paint on the first layer and give light touches to the painting. The second layer would be for filling out the details and the third was for finishing touches, as well as smoothing the surface. It is his assistants that would often work on the third layer in order to help finish the painting.

David was awarded the position of Premier Peintre (First Painter) to Napoleon and the French military leader fell so much in love with the painting that he ordered David to make three more copies for him. But what made this painting so well liked? In order to showcase authority and power, Napoleon is shown astride a rearing Arabian stallion. To his left we see a mountain and French troops in the background hauling a large canon. Napoleon’s gloveless hands are pointing to the invisible summit and the background of the picture shows more clouds, his cloak flying in the air.

This is done to stabilise the image of the leader in the viewer’s eyes. Another technique that David used is carving the name of Napoleon along with names of Hannibal and Charlemagne — two other famous figures who led their troops over the Alps. The main focus remains on the majestic horse and the figure sitting on it. It shows just how important Napoleon is and how his achievements will be spoken about for centuries. In fact, David fell in love with his own work and made a fifth copy of it which stayed in his studio. The other paintings were hung in Madrid, two in Paris, and one in Milan.

It is indeed a very rare occurrence for artists to make several exact copies of one portrait. It is usually the students that make copies of a painting for learning purposes. In this case, thanks to Napoleon’s vanity and the need to spread his own propaganda, he made sure his portrait was made several times and hung across Europe to showcase his power for centuries. The portrait truly is a delight to look at and the credit goes to the maker of it.

Next Up in Behind the Art: Why did James Abbott McNeill Whistler’s ‘Arrangement in Grey and Black No. 1‘ become a symbol of motherhood?