At a hotel in Cali, a major city near Colombia’s Pacific Coast, hundreds of people packed a ballroom for the woman at the center of the stage.

With her hand on her heart and a little gold cross around her neck, Marelen Castillo, a vice-presidential candidate who until recently was virtually unknown, explained once again that she was running for office to help “so many women in Colombia who do not have opportunities.” 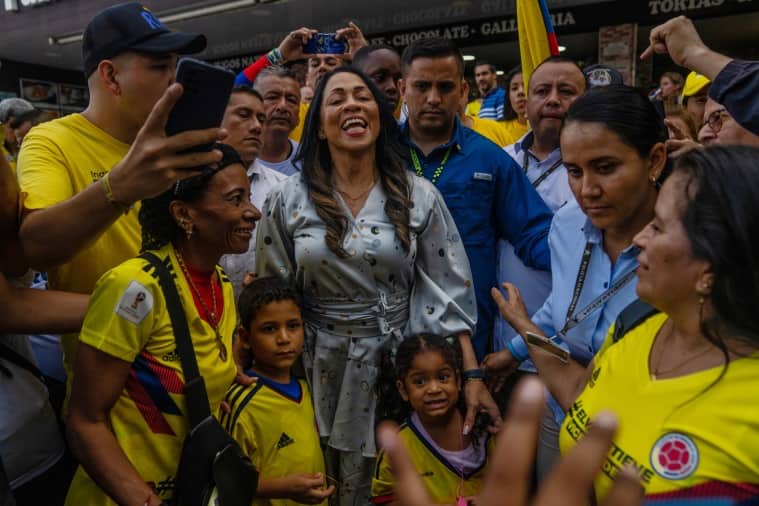 Supporters of Marelen Castillo, vice-presidential running mate of Rodolfo Hernández, surround her at a rally in the neighborhood where she grew up. (The New York Times)

A few months ago, Castillo, 53, had been a top director of a private Catholic university in Bogotá, the capital. Now she is the running mate of the anti-establishment politician and businessman who unexpectedly clinched second place in the first round of the nation’s most consequential election in decades.

On Sunday, Colombians will vote in the runoff, choosing between that candidate, Rodolfo Hernández, and Gustavo Petro, a longtime senator making a bid to be the first leftist president in the country’s history.

Whatever the outcome, the country is assured its first Afro-Colombian woman vice president: either Castillo, an educator and religious conservative, or Francia Márquez, an environmental and social justice activist.

The two women have starkly different approaches to some of the country’s most pressing problems: inequality, unemployment and the quality of the public education system.

While Márquez has made social justice and inclusion the core of her platform — speaking about race and class in a way rarely discussed in public circles — Castillo has kept her message centered on improving public education and increasing economic opportunities, particularly for women.

In an interview between campaign events in Cali, Castillo described growing up in a mixed-race family that blended harmoniously, with relatives congregating for every birthday, holiday and first communion. Her father is white and her mother is Black. But race, she said, was not discussed.

“Maybe because we grew up in that, we weren’t very much inclined to feel that way” about race, she said. “Because of the family togetherness.” The tenets of Castillo’s platform include raising salaries of public schoolteachers, investing in athletic and arts education and incorporating best practices from universities in other countries. Hernández and Castillo have said that, if elected, she will also become the minister of education.

She has also said that she would create a working group to revise higher education laws in Colombia. She did not specify what changes she would make, but said that any revision would be a participatory process.

Sandra Carrasquilla, 52, a Castillo supporter in Cali, recently started volunteering for Hernández after working on the campaign of the right-wing senator María Fernanda Cabal. She was drawn to the ticket largely by Castillo’s “spectacular” resume, warmth and message of unity.

“She is a woman who has dedicated herself to education and has a wonderful charisma,” said Carrasquilla, who works for a health food distributor. “That’s why Marelen got me hooked.”

Castillo grew up in Cali, the oldest of five daughters in a tight-knit, middle-class Catholic family.

Education was paramount in their household. Her father, a former schoolteacher, walked the girls to school every day and taught them to read.

“My dad used to say, ‘I educate them because I don’t want them to have to depend on someone later on,’” said Marelen’s sister Milene Castillo, a biochemist.

Castillo took this to heart, securing scholarships and earning four degrees, including a doctorate in education. During that time, she also worked as a public high school teacher, and later as vice chancellor of a Catholic university in Cali.

There, Castillo earned a reputation as a skilled administrator and “a supremely intelligent person,” said Santiago Arboleda, a professor of Afro-Andean history at the Simón Bolívar Andean University in Quito, Ecuador, who taught in Cali for years.

Fourteen years ago, she moved to Bogotá to work at Minute of God University Corp, a Catholic university that caters to low-income students in remote areas of the country with little access to higher education. She spearheaded the university’s virtual and distance learning program.

Education has continued to carry Castillo as she finds herself in the center of Colombian politics.

As voters prepare to cast their ballots, the vastly different campaign platforms of Castillo and Márquez reflect the cultural divide in Colombia of people demanding drastic social change on one side and those who say such demands create division when the country needs unity.

The women are two of five Afro-Colombians who were named as running mates to presidential contenders — a record in Colombia, where top politicians are mostly white, often educated abroad and connected to the most influential families.

For many, seeing two Black women who are so close to the halls of power recasts “the narratives of what is the appropriate place for an Afro-descendant woman,” said Aurora Vergara, director of the Center for Afrodiasporic Studies at Icesi University in Cali.

But it has also raised questions of candidates who have tried to demonstrate racially diverse representation while still avoiding a conversation about racism in Colombia.

On the campaign trail, Márquez has cracked open the national conversation about race in a country where the topic remains largely taboo. She attracts thousands of devoted supporters to her speeches in which she calls on Colombians to address systemic racism and sexism.

By contrast, Castillo acknowledges the existence of racism and sexism in Colombia, but it is not a central part of her message, unlike her leftist counterpart. She instead emphasises the idea of creating more opportunities for women.

“We have to recognise that Colombia is a machista country, and who gives us the opportunity? The men,” Castillo told The New York Times. “Now we have to give opportunities to other women.”

One of the most common criticisms of Castillo is that she has no experience in public office and would serve as second in command to one of the oldest presidents in Colombian history. If the 77-year-old is elected, Hernández will serve a four-year term. As they campaign for office, he and Castillo could not be more different.

Hernández is brash, informal and unpredictable, and has made so many offensive statements that one local news outlet recently compiled them in a digital catalog labeled “look how Rodolfo Hernández has offended you.”

Castillo by comparison is measured in her speeches, rarely straying from the party line. She has defended Hernández from accusations of misogyny after he told an interviewer “the ideal would be for women to dedicate themselves to raising children.”

But, internally, there have been disagreements.

In an effort to distance himself from the current conservative government, which faces dismal approval ratings, Hernández has recently released a series of progressive policy stances, including saying that his government would support a woman’s right to abortion.

Ángel Beccassino, an adviser to the Hernández campaign, said Hernández and Castillo had disagreed on the issue, but that Castillo had eventually settled on the position that “every woman has the right to decide for herself.”

In the interview, Castillo said that she was personally against abortion up to 24 weeks, but clarified an earlier statement in which she had said she would like the country to re-examine a recent high court decision that decriminalised the process up to 24 weeks. “I would like to review it. I have not said that I am going to review it,” she said. “My position is that I respect each woman’s decision.”

Visiting the neighbourhood where she grew up earlier this month for a campaign event, at least one person recognised Castillo: her cousin Iván Castillo, who happened to walk by on a trip to the bakery. He was surprised, he said, when he found out she was getting involved in politics, and even more surprised when Hernández moved on to the second round.

Like most of the township that includes La Base, the 49-year old civil engineer voted for Petro.

“Now with the family involved, I don’t know,” he said with a laugh, of the next election round.

“She is very good at her job as a teacher, an administrator,” he said, shaking his head. “But she has nothing to do with politics.”

He added, “A person like my cousin, to get into such a mess. My God!”