Once upon a time, winters were a much-awaited season in North India. But over the past few years, winters mean only one thing: air pollution. Of course, the Air Quality Index (AQI) is mostly terrible in cities such as Delhi all throughout the year, except during the monsoon season. But winter is when the situation typically gets unbearable and the yearly panic cycle starts. In my house, October begins with my husband ordering filters for all air purifiers and installing filters even in our air conditioners. While most air purifiers come with claims of removing PM 2.5 particles, Dyson states it goes well ahead with the ability to remove other harmful gases while ensuring that the purified air reaches all corners of the room. The company says it can also function as a heater and cooler for your room. Here’s my review of the Dyson Purifier Hot+Cool (HPO7).

Dyson Purifier Hot+Cool (HPO7): What does it offer?

The fact that this can be used to heat and cool one’s room is an added advantage. The heating option will certainly be useful for users in Delhi or other North Indian cities. In fact, I’m already relying on the Dyson to deal with the slight dip in temperature at night. And given I have a toddler at home, who loves to touch every single electronic item, I’m actually more comfortable using this for heating the room, than an actual heater, which can pose safety risks.

It comes with a remote control and you can also control the device from the Dyson app, Google Assistant, and Amazon Alexa. I connected it to my Google Home and controlled it with a Google Nest device, and it worked fine. It also comes with a dedicated auto mode which when enabled will ensure the machine maintains a preferred room temperature and air quality levels.

The air purifier has two HEPA H13 filters, which you need to install at the base of the machine before using it. The company states that the new HEPA H13-certified filter can capture the H1N1 virus and 99.95 per cent of particles as small as 0.1 microns such as allergens, bacteria, viruses, pollen, and mould spores. This is in addition to getting rid of the PM 2.5 and PM 10 particles, which tend to get all the attention in pollution season. The H1N1 claims come after testing in a lab and the company claims the real-life efficacy will vary.

Dyson is not the only company claiming that it can get rid of viruses with its air purifier. But as reviewers, it is impossible for us to test these claims.

The Dyson Purifier Hot+Cool resembles other purifiers from the company in shape and style. It is not as tall or skinny as some of the other cheaper models, the TP07 for example. I must also point out that given the unusual shape, toddlers will likely view this as a giant toy. My son kept trying to find ways of climbing on this, leaving me worried for both the machine and his safety. I’ve had a chance to use the Dyson Purifier during the worst period of air pollution, which is most of November. I had placed this in my master bedroom, which is not a very big room. But it is also close to my kitchen, where sometimes, the exhaust chimney is not turned on, despite the food being cooked. The reason I mention the proximity to the kitchen is that cooking also adds to the levels of indoor pollution. And in our apartment-style homes, this can make things worse without many of us realising.

The Dyson has so far managed to hold its own on most days, but has struggled on days with severe pollution. That’s because most air purifiers require that the room stay sealed shut to maintain levels. On days when the AQI was over 400-500, Dyson was mostly delivering moderate and at times poor results. Again, the poor results only showed when I had left the bedroom door and the main house door open for longer periods. But when the room remained shut for longer periods, the Dyson machine controlled the levels well and brought the numbers under 25 for PM 2.5 particles. 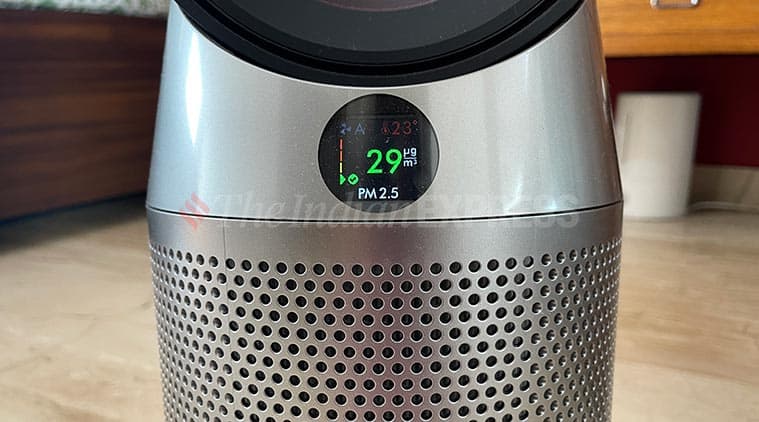 The app will also show the pollution levels for other pollutants such as PM 10, Volatile Organic Compounds (VOC), and Nitrogen Dioxide (NO2). It also shows the temperature and humidity as well. For the pollutants, you can see a graph on the app and the device’s screen to see just how bad things get in your home.

The Dyson works quite as well as a heater, which makes this an even more useful product. The purifier can be controlled via the Dyson app or its remote. I controlled it mostly from the app. You can choose to set the fan level—though this does get very loud when the fan speed is at a maximum of 10. You can also control the airflow direction from the remote and app. This one also comes with several rotation modes to ensure that there’s better airflow and purified air reaches all corners of the room. The options range from 45 degrees to 180 degrees to 350 degrees.

Just make sure that the air purifier is slightly tilted towards the bottom and the mode can be turned on from the remote. It took a few minutes to figure out which button on the remote was meant for this function. The Dyson Purifier can give a snapshot of the air quality in the last 24 hours. (Image source: Shruti Dhapola/Indian Express)

The biggest negative would be the noise. I felt that on days when the air pollution was really bad and I had to crank up the Dyson to its full capacity, the noise is definitely on the higher side. I would not call this a deal-breaker, but some users might find it tough to sleep at night when the air purifier is so loud.

Another potential issue is that given all the features, it can take a while to understand all of the functions. For instance, when I set it up, the air purifier showed pollution levels in the form of a graph. But I preferred to see the exact number for PM 2.5 on the device itself. I realised that the way to ensure this switch was to use the remote and press the (i) or information button on it. Again, it was not a connection I made instantly. Going through the installation guide before you start using this is a must. 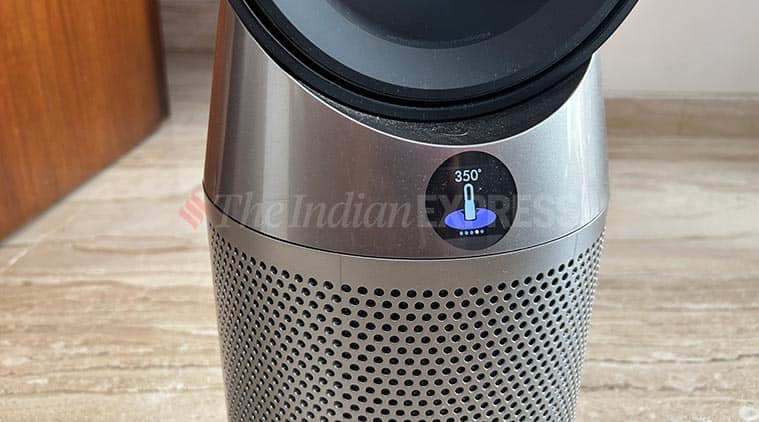 Dyson Purifier Hot+Cool (HPO7): Should you get it?

This is a great air purifier to get provided you can afford to pay the premium price that Dyson commands. That it comes packed with features and the additional heating+cooling functions mean you can use this even on days when the air quality is better. I’ve always been keen on getting a Dyson air purifier, and after using this, I’m quite close to hitting buy on one. The only thing that keeps me away from buying an actual Dyson is the price.

And if you’re still wondering whether you should get an air purifier, I would say please get one especially if live in North India or frankly any metropolitan city in India. It doesn’t have to be the Dyson, it can be a cheaper one from Xiaomi, Philips, or Honeywell, but get one. It has now become an essential device in our homes.