The temperature had reached 86 degrees and was climbing. Humidity measured in at 75%. Sunshine glinted off the tall buildings.

Fourteen volunteers, six climate researchers and a mobile biometeorological cart named “Smarty” prepared to set off for a “heat walk” in the Southeast Asian city-state’s downtown area. The volunteers had strapped on devices to measure their heart rates and the temperature of their skin. Winston Chow, the lead researcher, watched the scene as a sliver of sweat formed on his forehead.

Chow and his team are part of Cooling Singapore, a multi-institutional project that was launched in 2017 with funding from the Singapore government. The project’s current goal is to build a computer model, or “digital urban climate twin,” of Singapore, which would allow policymakers to analyze the effectiveness of various heat mitigation measures before spending money on solutions that might not work. It is research that the Singapore government hopes can be replicated around the world. A woman exercises in the shade at Bishan-Ang Mo Kio Park in Singapore, which has pledged to plant 1 million trees by 2030, July 21, 2022. (Gabriela Bhaskar/The New York Times)

“People have always wondered which is the critical component of climate that really affects your discomfort. Is it low wind speed? Is it high air temperatures? Is it high radiation from the sun?” said Chow, an associate professor of science, technology and society at the Singapore Management University.

“We get a handle on that, it can help a lot with smarter urban design at the planning level or with how individuals deal with heat,” he said.

Singapore’s wealth gives it the resources to invest in such high-tech solutions. But researchers say the Southeast Asian state’s geographical position also makes it a good model for others, particularly nations in the tropics. Situated near the equator, the island has year-round temperatures that hover around 88 degrees Fahrenheit. Like the rest of the tropics, it has the extra burden of high humidity, at an average 84%.

The research is especially relevant when many countries are being slammed by record temperatures. Heat waves in Britain, China, Japan and much of Europe have caused deaths, upended lives and forced tens of thousands of people to evacuate.

In Singapore, the fear is that extreme heat could make the affluent city-state uninhabitable. Temperatures are rising at twice the global average. A national climate change study in 2015 predicted that Singapore’s daily mean temperature could rise by between 35 degrees and 40 degrees Fahrenheit toward the end of this century. In 2019, the prime minister, Lee Hsien Loong, said in his National Day rally speech that Singapore’s weather was “palpably hotter” and that rainstorms were heavier, adding that “this will very likely worsen over the next few decades.”

Scientists have warned that the combination of high heat and humidity — known as extreme wet-bulb temperature — is potentially one of the deadliest consequences of global warming. Sustained exposure to certain thresholds of high heat and humidity makes it difficult for people’s bodies to cool down, as they cannot effectively perspire. That can be fatal, even for healthy people. Young children and older people are particularly at risk.

“We are very worried about climate change,” said Zhang Weijie, director of energy and climate policy at the Ministry of Sustainability and the Environment. “It is an existential challenge for us.”

“It is so important for us to keep Singapore livable and to be able to pursue the activities that we have right now,” he added.

Critics say Singapore could still do much more to slow the potentially catastrophic effects of climate change. Nearly all of its energy supply comes from fossil fuels, and it is home to one of the world’s largest oil refining and petrochemical complexes. It encouraged the near-ubiquitous use of the air conditioner, which Lee Kuan Yew, Singapore’s first prime minister, once called the most important invention of the 20th century.

But constantly running air conditioners in the city-state became prohibitively expensive. About 25% of low-income households living in one- or two-bedroom public housing apartments have air conditioners, according to a 2019 government survey. In 2019, a senior minister said air conditioners made up a “sizable” proportion of carbon emissions from buildings and households, the second-highest source after the industrial sector. Rachel Pek, a research assistant, with “Smarty,” a device that tracks radiation from the atmosphere, surfaces and wind, during a survey in Singapore, July 5, 2022. (Gabriela Bhaskar/The New York Times)

Gerhard Schmitt, lead principal investigator for Cooling Singapore, said the idea for the project started because he had asked a group of older residents in 2011 whether Singapore had always been this hot. They told him that it never used to be so bad and that they had once been able to spot morning dew on grass.

Schmitt and his team of researchers started investigating what happened. It became clear that urbanization had made Singapore a lot warmer than before. In recent decades, the government transformed the city-state by building tall skyscrapers, piling concrete, steel and glass where Singapore’s natural forests once stood.

That contributed directly to what climate researchers call the “urban heat island” effect, where the difference between downtown Singapore and the forests in the northwestern part of the island can exceed 45 degrees.

In 2017, researchers for Cooling Singapore recommended 86 ways the city-state could modify its planning, such as changing the direction of buildings to create wind flow and using district cooling systems — which pipe chilled water to surrounding buildings to cool the air — instead of relying on air conditioners.

They had also said that using reflective paints would be a good way to mitigate heat. But Peter Crank, a research fellow with Cooling Singapore, said they are expensive, so the “cost-benefit is potentially challenging.”

Before Cooling Singapore, the government had not fully identified the biggest factors influencing heat, according to Zhang. Now it is able to quantify how increasing greenery or reducing the number of cars in certain areas can affect temperatures — and tweak measures based on the needs of each district. 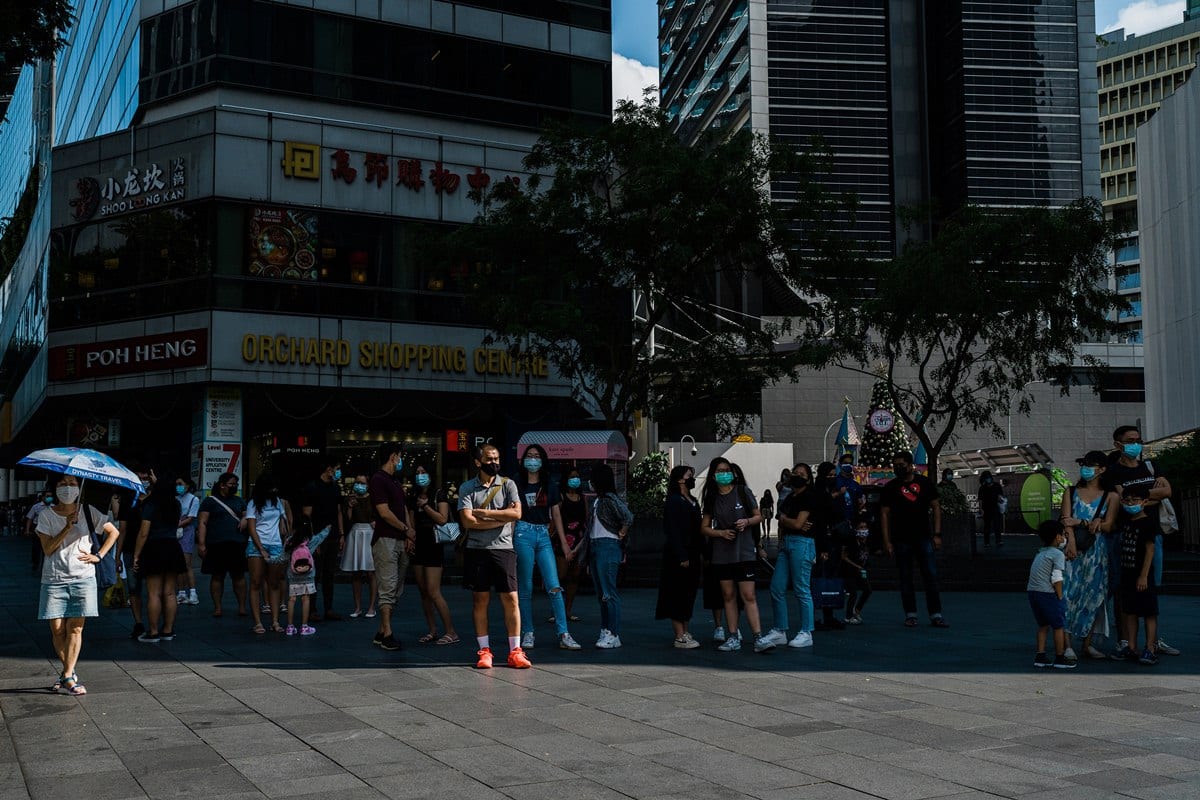 Previous heat studies typically relied on data derived from weather stations, which did not entirely reflect what people like Rachel Pek, 23, felt on the ground.

With sweat pouring down her face, Pek, a climate researcher, wheeled the mobile cart around for about an hour on the campus of Singapore Management University in downtown Singapore. Some neighborhoods, particularly those devoid of shade, were much hotter than others.

On Bencoolen Street, where tall buildings block the morning sun, the mean radiant temperature — a metric that measures not just the air temperature, but also the radiation from a person’s surroundings — was 82 degrees. About one-third of a mile away, on Queen Street, which was exposed to more sky, it was 127.4 degrees.

“The prevailing hypothesis now is that the presence or absence of shade in a place like Singapore is the critical determinant in adjusting to heat exposure,” Chow said. To address this, Singapore has pledged to plant 1 million trees by 2030 and has planted more than 388,000 so far.

But Chow said it is not just the number that is important, it is also the type of tree, ideally ones that have “canopies with maximum shade.” “If you have small trees, like palm trees, it’s not going to cut it,” he said.

One of the volunteers, Shamil Kuruppu, said he has stopped taking long walks, which he used to enjoy back in his hometown in Negombo, Sri Lanka. Now, he works out only in air-conditioned gyms.

“I really like it here,” Kuruppu, 28, said. “The only complaint I have is the weather.”

Yuliya Dzyuban, a research fellow with Cooling Singapore, said one goal that the scientists have now is to find ways to create “islands of relief” in the city, places where people can get the feeling of a cool breeze or air conditioning after walking outside on a hot day.

Research has found that small changes in urban design and vegetation can create these pleasurable sensations, Dzyuban said. A better understanding of how and when people are exposed to heat could even help governments come up with plans to encourage more people to take public transportation, she added.

To get people to change their habits, “we need to think about how to make their experiences more comfortable and more pleasurable,” she said. “Because otherwise, they won’t do it.”