Bollywood actor Hrithik Roshan took to his Instagram and gave a shoutout to his girlfriend Saba Azad. The rumoured couple, who just got back from their romantic getaway in Europe, are back in work mode. Ahead of Saba’s concert in Hyderabad, the War actor shared the poster and wrote, “Kill it guys,” followed by several emoticons.

Saba is a member of the well-known electronic band Madboy/Mink along with Imaad Shah, the son of veteran actor Naseeruddin Shah. Saba announced her upcoming concert dates on social media and wrote, “Yo Hyderabad we comin for you tomo come dance with us.” 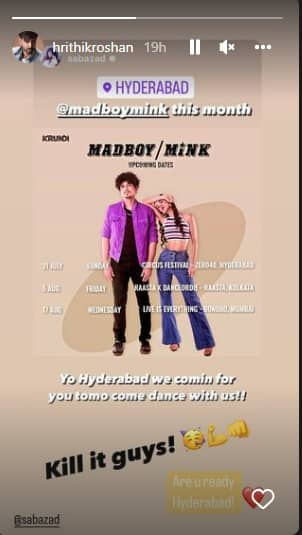 The couple walked the red carpet together at Karan Johar’s 50th birthday party. From coffee dates to long-drives, Saba was actively sharing pictures of their vacation on her Instagram handle. She shared a series of pictures from their time at Ronnie Scott’s Jazz Club and captioned it as, “Where the Jazz cats at??”. The pictures went viral the moment it was posted and Hrithik’s ex-wife Sussane Khan commented on the picture and wrote, “sooo cute!!” with red heart emoticons.

On the work front, Hrithik will be next seen in Vikram Vedha which is helmed by director duo Pushkar-Gayathri,. Co-starring Saif Ali Khan, the film is a remake of the Tamil thriller of the same name starring R Madhavan and Vijay Sethupathi. The Hindi remake is set to hit the theatres on September 30. The actor also has Fighter with Deepika Padukone, which is scheduled to release next year.

Saba was last seen in the web-series Rocket Boys. She essayed the role of Parvana Irani. The show also starred Jim Sarbh and Ishwak Singh in pivotal roles.