The transfer order dated August 2, a copy of which was accessed by indianexpress.com, read: “The Sagar MLA Harthalu Halappa has said that the accused were treated in an inhuman way in violation of laws. He urged the matter to be investigated. The conservator of forest, Shivamogga circle has been asked to conduct the inquiry. For the impartial inquiry to be conducted deputy range forest officer Pramod S Kumbara is transferred to the information communication technology wing, Shivamogga wildlife division.” 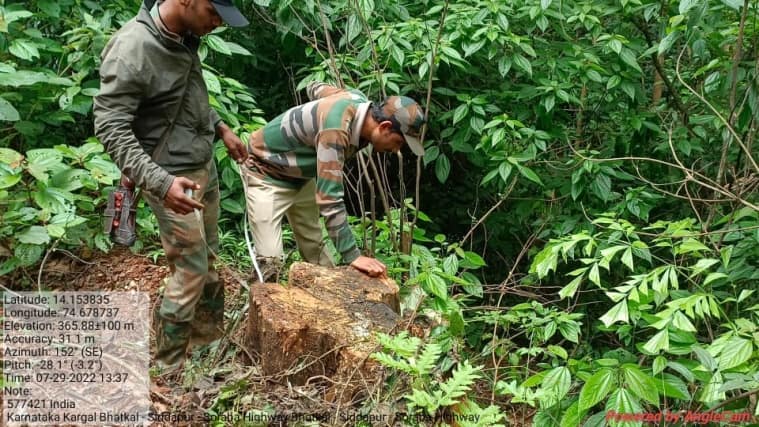 The MLA has defended the accused stating that they wanted electricity connection owing to which they had to cut down the trees, the sources added. (Express Photo)

Forest department sources alleged that Halappa along with local leaders and the state home minister came to the rescue of the accused and exerted pressure on the department to ‘punish’ the official who nabbed the accused. The MLA defended the accused stating that they wanted electricity connection owing to which they had to cut down the trees, the sources added. Reacting on the issue, wildlife conservationist Joseph Hoover said “We are all being battered by extreme climate events. At such a critical time, we need to protect our biodiversity.” (Express Photo)

“The MLA on July 31 said in a meeting that the forest department has treated the poor farmers, who cut the trees because they wanted an electricity connection, as criminals. He requested the home minister that an inquiry be conducted in this matter. No torture, mental or physical, was meted out to the accused. The trees cannot be felled like that within a protected sanctuary. Even for government projects, the forest department seeks clearance from the Union environment ministry and here the three accused have axed 33 trees,” a senior official from the forest department said.

Reacting on the issue, wildlife conservationist Joseph Hoover said, “Some local MLAs and MLCs from Shivamogga district, including Home Minister Araga Jnanendra, have come to the rescue of the accused. They have exerted pressure on the government to punish forest staff who apprehended the accused. The accused had reportedly damaged forest property in the past as well.

“We are all being battered by extreme climate events. At such a critical time, when we need to protect our biodiversity, these politicians, for want of votes, are defending people who are destroying our forests. I want to ask a question to Prime Minister Narendra Modi: ‘Should foresters be suspended and punished for protecting flora, fauna, and biodiversity?’”