The release of six convicts in the Rajiv Gandhi assassination case (the seventh was released earlier) has divided opinion on the rights and wrongs of the decision. A less debated aspect of the case is the Supreme Court’s unanimous view in its 1999 judgment — which confirmed the death sentences of four convicts and life terms for three — that the killing by the LTTE was not a terrorist act.

The prosecution failed to convince the court of charges under the Terrorist and Disruptive Activities (Prevention) Act, the anti-terrorism law in force at the time. The suicide bomber used for the killing in May 1991 was a first-of-its-kind weapon — and one that has since been used countless times by terrorist groups around the world. 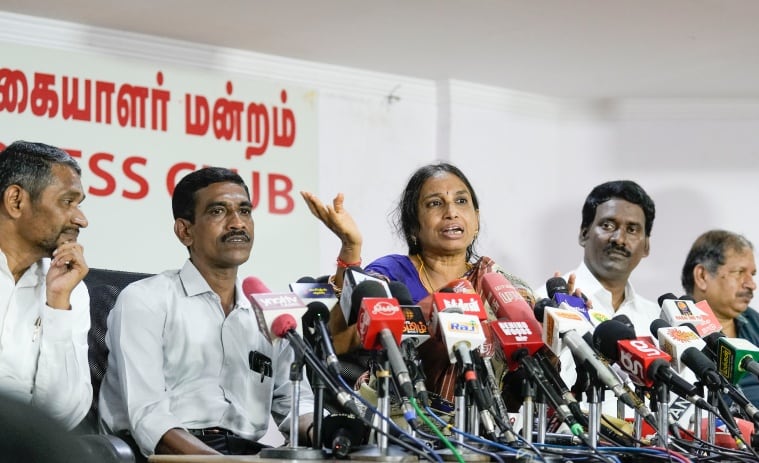 Chennai: Nalini Sriharan, one of the convicts in the Rajiv Gandhi assassination case, speaks to reporters during a press conference after being released from prison yesterday, in Chennai, Sunday, Nov. 13, 2022. (PTI Photo/R Senthil Kumar)

The matter came before the SC in 1998, when the TADA court that sentenced all 26 accused to death, sought confirmation of the sentence. The convicts too had filed appeals against their conviction and sentencing. The court clubbed the cases and heard them together.

The three judges on the Bench differed on the level of involvement of the 26 convicts, as well as on the quantum of sentence, and gave separate judgments.

* Justice K T Thomas found seven of the 26 guilty and acquitted the rest. But he confirmed the death sentence of only Santhan, Murugan, and Perarivalan, and sentenced Nalini, Robert Payas, Jayakumar, and Ravichandran to life imprisonment.

* Justice D P Wadhwa found only four persons guilty — Nalini, Santhan, Murugan, and Perarivalan — and confirmed their death sentences, and acquitted everyone else.

However, the three judges were unanimous that the “horrific” crime, carried out through a “diabolic” conspiracy, attracted only the relevant IPC sections of murder (302) and conspiracy (120-B), and that the provisions of TADA could not be applied to any part of the crime.

The court said that under this definition, “intent” was critical. “It is not enough that the act resulted in any of the four consequences,” Justice Thomas wrote in his judgment, relying on previous rulings of the Supreme Court — the four consequences being overawing Government; striking terror in the people; alienating a section of the people; adversely affecting social harmony.

The prosecution’s case was that the assassination was an act to prevent the government from continuing with the implementation of the 1987 India-Sri Lanka Accord, as Rajiv had said he would do upon re-election and, in this sense, was meant to overawe the Indian state.

Quoting from a speech by Velupillai Prabhakaran, the court said that the LTTE leader was critical of the former Prime Minister, but he had specifically said “we are not against India or the Indian people but against the former leadership in India who is against the Tamil liberation struggle and the LTTE.” Quoting from other speeches and an editorial in the LTTE publication Voice of Tigers, the court said:

“[…]it is difficult for us to conclude that the conspirators intended, at any time, to overawe the Government of India as by law established. Nor can we hold that the conspirators ever entertained an intention to strike terror in people or any section thereof. The mere fact that their action resulted in the killing of 18 persons which would have struck great terror in the people of India has been projected as evidence that they intended to strike terror in people. We have no doubt that the aftermath of the carnage at Sriperumpudur had bubbled up waves of shock and terror throughout India. But there is absolutely no evidence that any one of the conspirators ever desired the death of any Indian other than Rajiv Gandhi…Of course they should have anticipated that in such a dastardly [act] more lives would be vulnerable to peril. But that is a different matter and we cannot attribute an intention of the conspirators to kill anyone there than Rajiv Gandhi and the contemporaneous destruction of the killer also.”

The court also ruled out Section 4 of TADA, under which killing a person bound by oath under the Constitution to uphold the sovereignty and integrity of India or any public servant was deemed a disruptive activity.

Nine police personnel had been killed in the bombing. The court said there was no evidence to show that any of the 26 convicts had intended to kill these police officers. Also, while all evidence pointed to the intention to kill Rajiv, “unfortunately Rajiv Gandhi was not then ‘a person bound by oath under the Constitution to uphold the sovereignty and integrity of India’”.

The court noted that even Lok Sabha had been dissolved months prior to the incident, so he was not under oath as a Member of Parliament either.

The court also said that the charge that the conspirators intended to disrupt the sovereignty of India could not be concluded from the photos of Fort St George, Madras (which houses the Tamil Nadu government secretariat and legislature), police headquarters, central jail within Vellore Fort, that they had taken.

Justice Quadri noted that the charges did not even mention the intention to overawe the state. Justice Wadhwa said there was “nothing on record to show that the intention to kill Rajiv Gandhi was to overawe the Government”. He also noted that perpetrators of acts of terrorism are quick to take responsibility, whereas the LTTE had gone to great lengths to conceal its involvement.

Ultimately, the court applied only IPC sections of murder and conspiracy to the seven persons who were found guilty.