Shortly after Santina Rizzi graduated from Florida State University in spring 2021 with a degree in political science, she started working as a paralegal at a Miami law firm where the office dress code was business casual: button-up shirts, long skirts (or short skirts with tights) and closed-toe shoes.

Rizzi frequently opted for crop tops. She would often share her work looks on TikTok in “GRWM” — get ready with me — videos, earning her a reputation among followers and colleagues alike for violating the dress code. Now 22, Rizzi has a new full-time job as a social media manager in Miami, but her crop tops remain.

“I’m not going to buy clothes specifically for my job,” she said. “I’m stubborn that way.”

The traditional office dress code has long been over. Visible tattoos are acceptable and bluejeans and sneakers have become the norm in many workplace settings. Even rigid banking firms like Goldman Sachs and JPMorgan Chase have eased up in recent years to embrace casual fashion. And look, Jason Sudeikis isn’t the only person wearing a hoodie to work events.

With employers offering incentives to get workers back in the office and the skyrocketing costs of, well, everything, the next evolution in our workplace wardrobes might just be the freeing of the midriff. 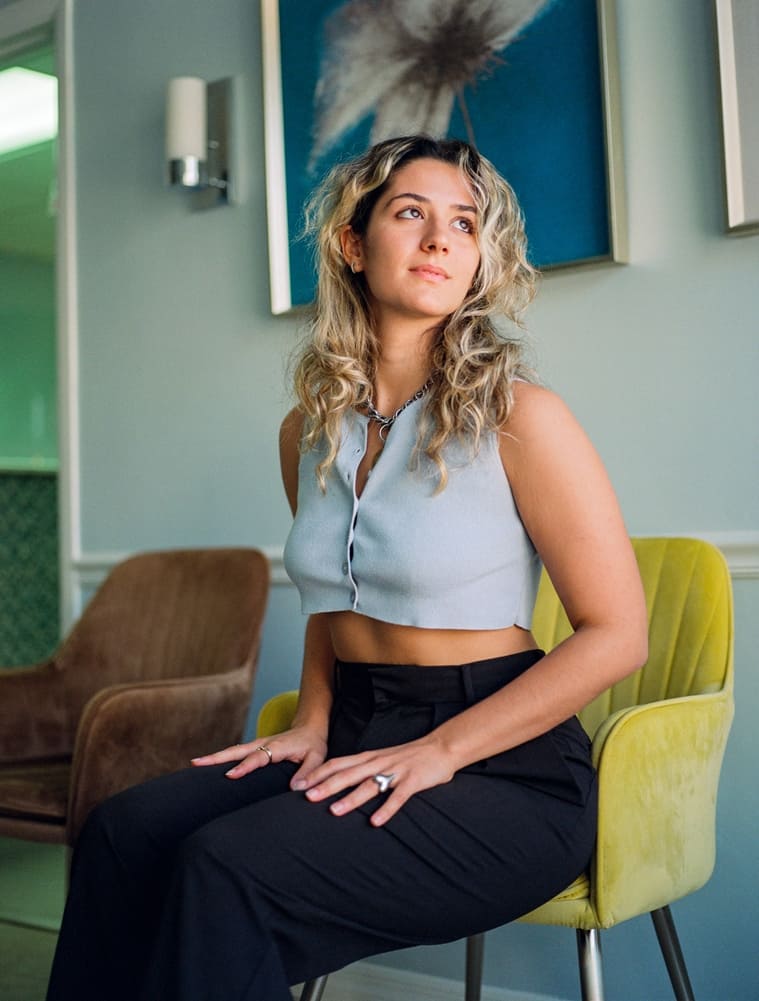 Santina Rizzi in the plastic surgery office where she works as a social media manager in Miami. (Ysa Pérez/The New York Times)

On TikTok, videos showcasing crop tops as work wear frequently draw criticism from users, including accusations of unprofessionalism and suggestions that the posters are merely cosplaying the lives of actual office workers. But the trend is also praised, particularly by members of Gen Z, as a stylish show of resistance against the status quo. And it’s not just online either: On recent weekdays in Midtown Manhattan, many women were spotted wearing crop tops as part of their work attire during the evening rush hour.

On occasion, Rizzi’s outfits for the day — consisting mostly of trousers from Zara, cropped tank tops and oversize blazers to cover up (“in case one of the partners were walking by”) — have been highlighted by TikTok’s For You feature, putting her videos in front of people she referred to as “career adults, 30, 40 years old.”

“The comments were crazy,” she recalled. “Like, ‘I would fire this girl’; ‘This is so disrespectful’; ‘I don’t know what this generation’s doing.’ I remember one time we had a corporate client coming into the office and my boss specifically approached me the day before, and he was like, ‘Please, for the love of God, no crop tops tomorrow.’ ”

One reason Rizzi gives for her decision to wear crop tops at work is that she objects to the idea of spending money on professional clothing that she will wear only a few days out of the week — especially if the clothes do not fit into her personal style or aren’t sustainable.

In July, she began producing social media content for Dr. Michael Salzhauer, a celebrity plastic surgeon known as Dr. Miami, and her crop tops are, to her relief, accepted in the office. And despite comments from her former boss and colleagues, she never got in any real trouble for it.

“I guess the thing was that I went into it, 21 years old, kind of straight out of college, and I didn’t have a lot of professional wear, but it didn’t make sense to me to buy so much of it because my closet is pretty minimal,” she explained. “I don’t want to buy things that I don’t think I’m going to wear.”

For Jane Yee of Adelaide, Australia, cost is also a big reason she chooses to disguise her crop tops in her work attire, even though they are frowned upon at her job. She said she preferred to shop her closet or go thrifting for work clothes. “When I incorporate crop tops in my work fits, I try to make it as work-appropriate as possible,” said Yee, 22, who works as a recruiter for an organization that focuses on employment services. “So if I know I’m going to wear a crop top or a top that isn’t going down and covering my waist, I’m going to always try and pair it with something that is more high-waisted or just pop on an extra blazer just so it looks more formal.”

“I think it’s just more me,” she added. “I don’t want to spend a certain amount of money to get corporate clothes that I’m going to wear during my 9 to 5.”

Unprompted, Rizzi and Yee each pointed to Matilda Djerf, the popular Swedish influencer known for her minimalist style and “clean girl” aesthetic, as another reason for the crop-top-and-blazer look’s booming popularity. Her fashion brand, Djerf Avenue, champions the ensemble, along with other online trends.

“I think because we’re seeing more of that corporate wear being worn out like streetwear, I think a lot of brands are starting to take that as inspo and market their clothes as corporate,” Yee said.

As the fashion trends of the 1990s and early 2000s continue to grow in popularity, tops that are cropped or perforated with eccentric cutouts are widely available in stores today. Many retail websites, including Revolve, Forever 21, Asos, Shein and Fashion Nova, showcase crop tops in their work wear categories, along with miniskirts and backless blouses. Based on how they’re presented online, the recent college graduate could be forgiven for thinking that crop tops are unimpeachably office-appropriate.

Amari Rivers, who for nearly a year worked as a community engagement specialist at a nonprofit on the upper West Side of Manhattan, usually shops at H&M, Shein, PrettyLittleThing, Amazon and occasionally Fashion Nova. She said in a phone interview that the tops in her wardrobe were mostly cropped because she’s more “drawn” to them when she goes shopping. She would pair them with high-waisted bottoms to avoid criticism at work. Young employees, many of them new to office jobs, are bringing crop tops, a wardrobe staple usually reserved for the weekends, into the workplace. (Simbarashe Cha/The New York Times)

“I feel like sometimes, even when I’m not looking for a crop, like, if I’m looking for full-length clothes, I struggle because everything is crop now,” said Rivers, 22, who lives in the Bronx and is now employed by a different nonprofit that allows her to work remotely, meaning she can wear whatever she wants.

She described her style as being either “super girlie-girlie” or streetwear-inspired and said it was hard to set aside money for professional clothes. As a last resort, she occasionally turns to H&M.

“If I’m trying to get something that’s really worky-worky or fancy, I would go there,” Rivers said. “I like their office section, but it’s not the cheapest.”

Antonia Davis, a 27-year-old who works in human resources at a community college in La Plata, Maryland, has had to issue warnings to employees on campus for their crop tops. Once, Davis recalled, a student assistant in IT went to her office to complain about her supervisor, who had told her that she couldn’t wear her outfit that day — a short pleated skirt and a crop top. Following the rules of the workplace, Davis sided with the assistant’s boss.

“I think it really depends on your job because I think some people around here wear crop tops, but she’s in IT,” Davis said in a phone interview.

Preventing workplace harassment is typically one of the chief reasons for a dress code, a tool with which employers try to protect employees from unwanted distractions and comments from others — an even greater priority since the #MeToo movement began. But when it comes to wardrobe, many believe that a respectful workplace is the responsibility not of the employee selecting an outfit in the morning, but of their colleagues not to be inappropriate.

“The choice should be left to the individual,” Rizzi said, adding, “In my experience, men will be gross no matter what you’re wearing.”

Whether crop tops are appropriate for the office might depend on who you ask, but it seems as if some workplaces aren’t clutching their pearls quite so tightly at this latest development.

Ten months into her new job, Yee said, she still has yet to be asked about her choice of office wear.

“I guess maybe that’s not their top priority,” Yee said. “I think the clothes you’re wearing, it doesn’t define the work, how much work or how much effort you’re going to put in that day.”